Paul Harper and Margaret Bogue-Harper wanted to get rid of the grass in their front yard because they felt it wasn’t ecologically viable. After 26 years of tending to it without the use of pesticides, they continued to be troubled by environmental decline, and wanted to do more to help prevent it. Their goal was to stop mowing their hilly surroundings and create a more natural landscape with native local plants that would attract insects, bees and butterflies and help them thrive. Paul says, “We need them, and we can’t let them cease to exist.”

Margaret was also concerned about having to continually replace plants in the yard. It seemed that other than daylilies, whatever they planted didn’t last. The couple was inspired by the way a neighbor transformed their yard and decided that native plants were the answer. They wanted plants that would provide color throughout the year and they wanted a place to sit and enjoy them on a summer night, while interacting with neighbors. 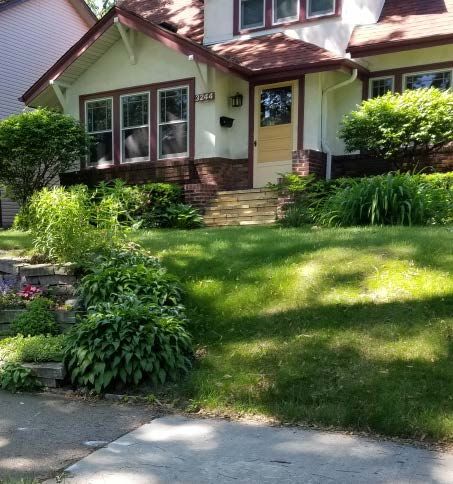 “Inertia was a challenge,” says Margaret. “The yard has been the same for 26 years and we asked ourselves if we were departing from the American way by losing the lawn. The answer is ‘yes,’ but we’re okay with that.”

Paul and Margaret wrote out their objectives, created a hand-drawing of the hard scape layout they wanted, and gave Russ Henry and his team the go ahead to create a plan. “Russ designed a layout for the plants and sent a long list of great possibilities,” says Margaret. “The plan Russ presented was great. We didn’t change it at all.”

23 new shrubs, perennials, and ground covers were installed, including redbud and serviceberry trees, arborvitae, sumac, Vinca minor, cinnamon fern, bloodroot, and Jack-in-the-pulpit. And, some of Paul and Margaret’s existing favorites, Hosta and black cohosh will continue to grace the space. Once the new plants were in place, premium mulch was applied to retain moisture and protect them from extreme temperatures. A flagstone patio was incorporated into the design to provide the space that Paul and Margaret wanted for relaxing and enjoying the flowers, and their neighbors.

“Our yard is now a big garden,” says Paul. “And, the new patio gives us another comfortable space with an opportunity to be more social, rather than sitting in the backyard, surrounded by a fence.” Paul and Margaret say their project was completed in a week, and everyone at Minnehaha Landscaping provided great service. Margaret says, “Now, it’s time to add a bird feeder!”

“Our yard is now a big garden.” - Paul Harper