Amy Knopke and Kathryn Jensen describe their European style home as “a piece of art.” There is artistic architecture on the exterior and artwork on the walls of the interior. However, they could find no visual appeal to the buckthorn in the backyard and grub worms in the front yard, a sign of unhealthy soil. 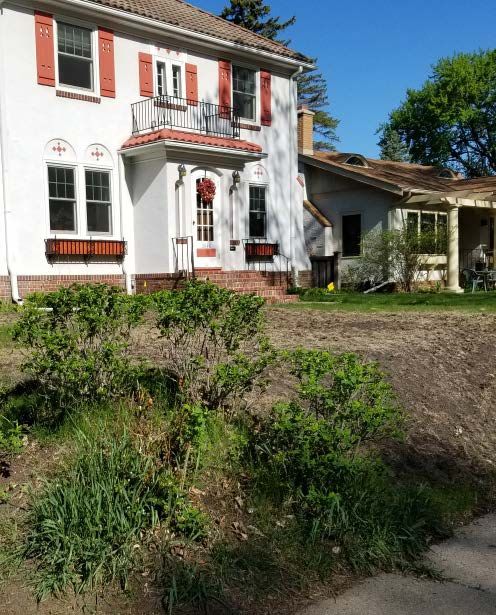 As a house on a hill, the front yard presented challenges. It was difficult to mow and as Kathryn says, “screamed for help, and after the winter thaw, resembled a scene from Close Encounters of the Third Kind.” Kathryn and Amy knew a transformation was in order. It would be a big project, so they called Minnehaha Falls Landscaping for help. Owner Russ Henry suggested a bee-friendly lawn for Kathryn and Amy’s yard because it is low maintenance, and when done right, it can feed 80 species of native bees. They loved the idea, along with retaining walls to break up the hill. Amy says, “Russ knew just what we needed!”

Broad textured plants where placed next to delicate textures. A bee-friendly mix of clover, creeping thyme, and a variety of grasses create a salad bar on this bee buffet. Calamint was added for flavor (also edible by humans), and purple cone flowers were incorporated to feed long-tongued native bees, along with red cardinal flower to attract hummingbirds. The focal point of the yard features mega Monarch butterfly magnets, Joe Pye weed and Meadow Blazing Star, a plant that provides delicious nectar until the bee buffet is frozen. Once it thaws in the spring, bees will gather up the leftovers to go for papering their nests. Kathryn says, “From beginning to end, we could not have been more delighted with the responsiveness and thoroughness of the plans. The pricing was all transparent, the team that built the retaining wall were artists and incredibly hard workers. I felt as though they were building a pyramid for the Egyptians. They were precise, analytical and appreciative when I brought out treats. They were a fun crew to have around.”

Kathryn and Amy say their yard is now a work of art. And, the nematodes that come with healthy soil attacked the grubs, so they are gone. The family is enjoying learning about the plants and the wildlife they attract. Amy says, we bought a service, and were given something special in return.” Kathryn adds, “Sod would have been tragic. If our house were a person, she would say, ‘good job!’”