What is Healthy Soil? 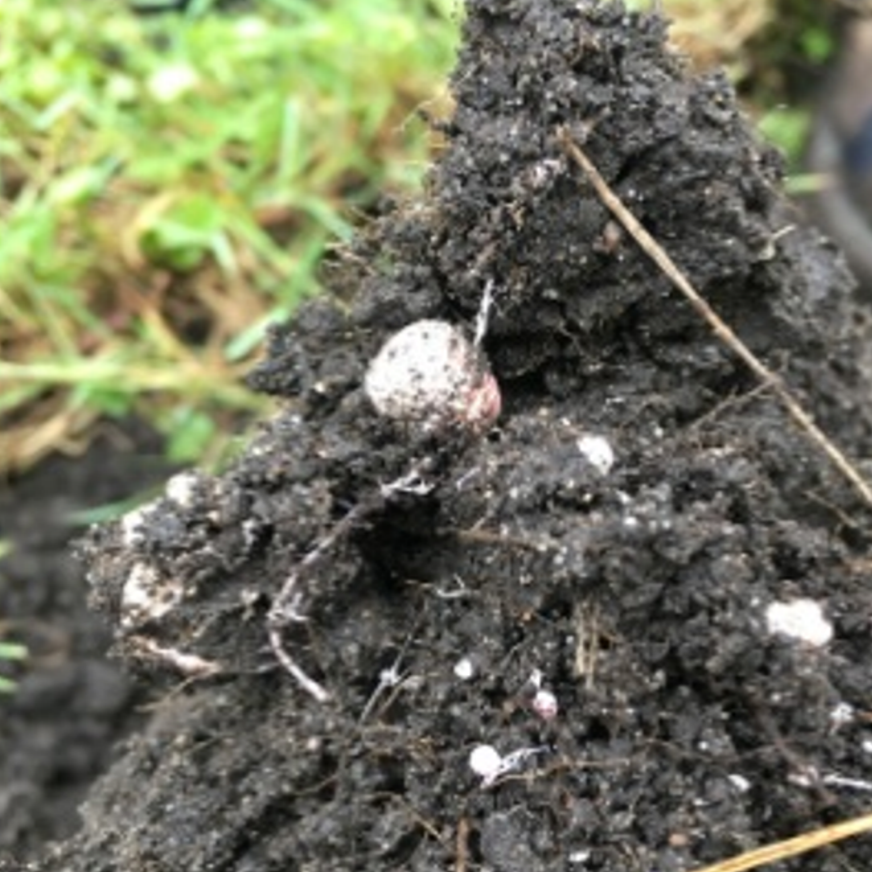 Soil is a dynamic, living aggregate comprised of:

Many people have started saying “dirt is dead, soil is alive” - this isn’t entirely accurate, but it gets the idea across well enough.

Dirt, the parent material of rocks and minerals, is usually well-staffed by bacteria. What it lacks are beneficial fungi and an intact soil foodweb.

Dirt also lacks structure - meaning it is mostly mineral particles collapsed upon each other, like a bull-dozed building. Because it doesn’t have structure, air and water have a difficult time interacting with dirt. Water will usually saturate the top couple of inches, causing an oxygen-deficiency, and then run-off carrying dirt and debris with it.

Healthy soil requires a balanced flow of oxygen to allow microorganisms and plant roots to breathe! Without air flow, the soil and all of the life within it suffocates. 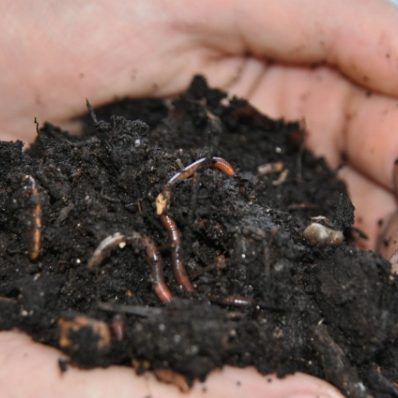 Land plants only evolved once the soil microbe community was relatively well-established. They established themselves within an already vibrant and thriving underground world of bio-chemical exchanges and they evolved with that support network buzzing around their root system. It’s only once that supportive network disappears in the creation of dirt that plants rely on humans to meet their nutrient and disease-fighting needs.

Restoring healthy soil allows plants to regain their friendly partnerships so that they can make the nutrient deals and trades that they need to thrive. All of that partnering microbial activity creates a sort of defensive line, or castle wall, around plant roots. This makes it very difficult for pathogens to get in and attack plant cells.

Soil microbes also act like the internet below ground - sending and receiving chemical and electrical signals from plant to plant. We’re just barely tapping the surface of understanding around this.

2. Supporting Animal Health
When plants have access to all of the micronutrients they need because of microbial partnerships, they are of course healthier and make more nutrient-dense food for the beings that eat them. Plants are primary producers, so with very few exceptions, almost every other living thing on this planet relies on plant nutrition for their own. Soil microbes also produce a whole host of defensive compounds like antibiotics that impact other creatures.

3. Sequestering Carbon
Soil has the capacity to store an immense amount of carbon. Since the beginning of industrial agriculture, we’ve off-gased about 136 gigatons of carbon from the world’s soils (See Soil Carbon Restoration: Can Biology Do the Job?). Returning even 75% of that would allow us to get back to the 350 ppm CO2 in the atmosphere that NASA scientists assume would avoid cataclysmic climate disaster.This is a critical fact in our age of climate change. Soils do breathe, because they are made up of living beings who require oxygen and exhale CO2, but many of these organisms, like fungi, produce carbon-based glues that resist decay thereby locking formerly-atmospheric carbon underground. Humus is largely made up of carbon, also resists decay. And healthy plants efficiently shuttle carbon-based energy below ground to feed microbes. Healthy soils are carbon sinks!

4. Remediating Pollution
The diverse bacteria and fungi present in healthy soils are great chemists! They have the ability to decompose organic compounds, including hydrocarbons from petroleum and many of the pesticides, herbicides, and other dangerous chemicals used by humans.

5. Holding, Cleaning, and Infiltrating Water
Healthy soils not only allow water to flow deeper down, recharging ground water, but they also hold more water due to having higher levels of organic matter. Healthy soil does not leach nutrients. In healthy soil, soluble nutrients are either used up by plants or sucked up into the bodies of micro-organisms where they are held until those organisms become someone else’s lunch. Almost 90% of the inorganic nutrition fed to plants in the form of human-made fertilizers leach out of the soil and into our lakes and rivers, causing hazardous algal blooms, dead zones, and the loss of aquatic life. This is because we are applying too much, more than the plants can eat at one time, and because we are applying these nutrients to dirt, which has no capacity to hold onto them. 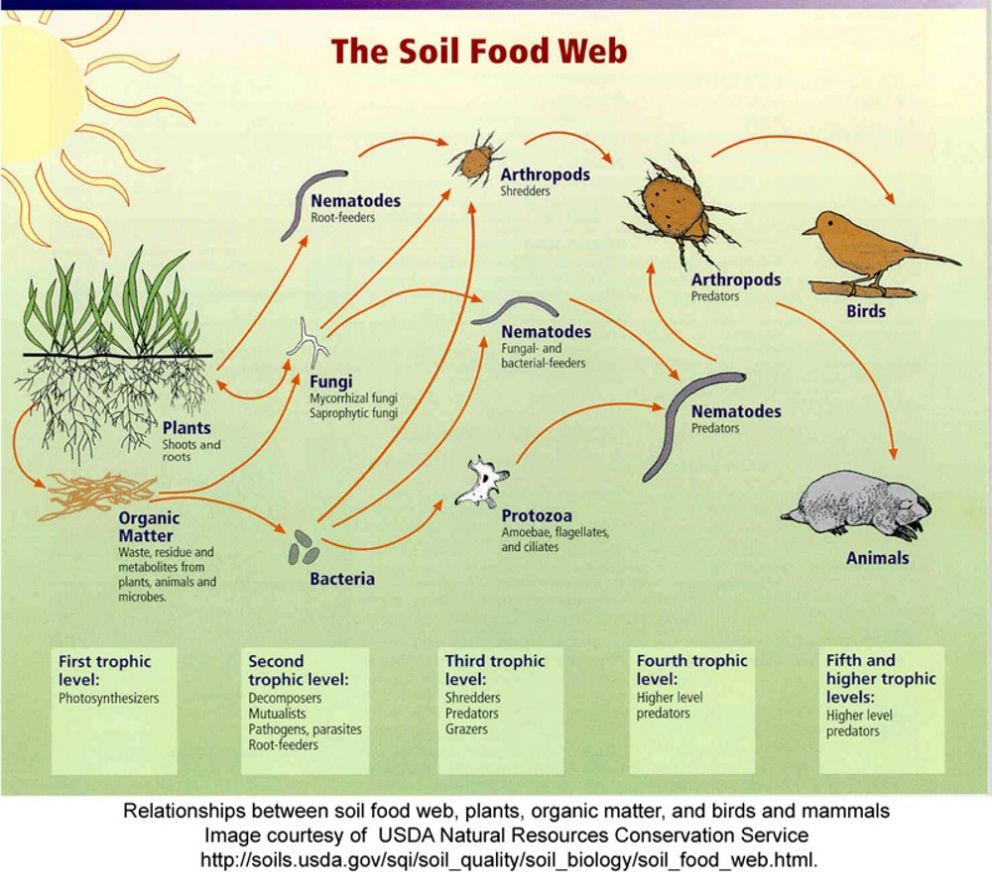 Also the low-end estimate for the number of microorganisms in one teaspoon of healthy soil.

The soil food web, like a northern hemisphere food chain, begins with plants. Plants have this magical ability to breathe in carbon dioxide, suck up water, and then use sunlight(!) to cook those raw ingredients into sugary energy. Sugar is simply carbon atoms linked together after a plant uses sunlight to crush up some carbon dioxide molecules. Plants then make more complex compounds, like carbohydrates (which are just longer sugar chains) and proteins (which are carbohydrates with some nitrogen attached) with all of those carbons they accumulated from the atmosphere. The plants then use these ingredients to build their own selves - their leaves and stalks and flowers - but they also do something amazing: they leak a lot of these sugary foods out into the soil through their root. The substances that plants leak out are called root exudates.

Why would plants just leak out all of this hard won energy that took them a full day of photosynthesizing?? It’s to feed their soil friends, of course! Carbon is the basis of all life on earth, and it is sometimes talked about as the currency of life below ground. If plants leak out carbon energy in the form of sugars, carbs, and proteins, they attract lots and lots of little hungry creatures like bacteria and fungi who will gladly trade some of their spoils in exchange for carbon. In nature, plants get their nitrogen, their phosphorus, their cobalt, in the exact amounts they need because they have these partners below ground constantly running errands in exchange for carbon.

The root zone of plants then is like a busy buzzing city of bacteria and fungi making these trades. The equivalent above ground is a field full of rabbits getting plump on a sea of green plants. If you have only rabbits, the plants aren’t going to last very long. We need predators in that ecosystem to keep the rabbit population under control and keep nutrients cycling within the system. Same thing underground, except instead of foxes and wolves, we have nematodes and protozoa. These two groups of organisms love to feast on bacteria and fungi in the root systems of plants. Luckily for the plants, the microscopic manure made by these creatures is bio-available, meaning it can be absorbed into the roots of the plant - naturally fertilizing every second of every day in the amounts plants can absorb.

The food web gets more complex as some types of nematodes eat other nematodes, some types of protozoa eat fungi while most others prefer bacteria. Worms love to eat protozoa and their manure is spilling over with diverse bacteria and fungi. Micro-arthropods, like mites, are great at ripping up organic matter which creates more surface area for decomposers like bacteria and fungi… and on and on.

All of this activity is happening in the root zone, the rhizosphere, so in healthy soil, plants have billions of microbe partners making it nearly impossible for soil-borne pathogens to get access to their roots. Some beneficial microbes even produce antibiotics and other compounds to deter disease-causing organisms.

This complex web of life is what makes healthy soil function and it is what keeps plants growing strong. In going about their business, soil microorganisms build structure in the soil, which is essential for nearly all of the ecosystem services provided by healthy soil. 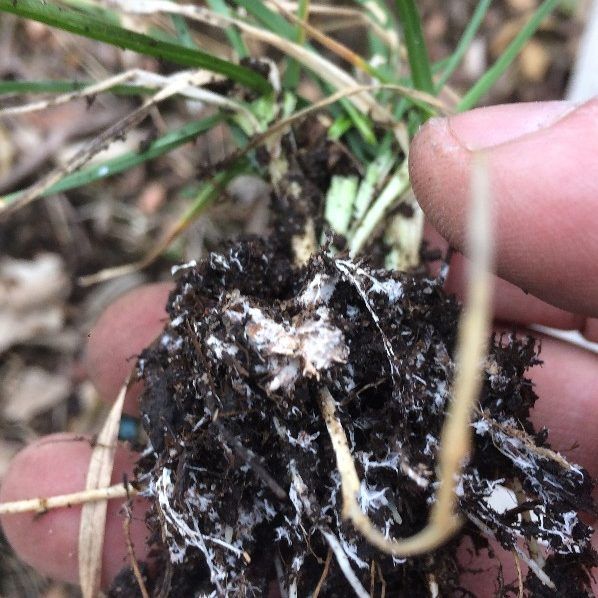 All this aggregation creates pores, passageways, and micro-habitat.

Soil Biology and the Landscape, NRCS

Can Dirt Save the Earth, NY Times

Soil Carbon Restoration: Can Biology Do the Job? By Jack Kittredge, NOFA/Mass